I like to think my sense of the beautiful only grows as I come to recognize more forms of caring and resilience and to appreciate a wider range of shapes and sizes and colors and textures. On my best days, I see it everywhere, and the more I see it, the more space it takes up, which is wonderful.

In celebration of Women’s History Month, I chatted with Dr Penny Weiss, the Director of Women’s Studies at St Louis University.

Can you give me just a little bit of background. Where are you from? Where did you go to school? What brought you to St Louis?

I am a native of Miami, Florida and a graduate of the University of South Florida. I went to

grad school in the Midwest and have since spent most of my adult life here. I came to STL in 2008 because I had the chance to move from a position in a political science department to one in a women’s studies program, and from a rural setting outside a small city to the big city. It was a phenomenal switch!

What drew you to Women’s Studies? Was there one turning point or “ah ha!” moment?

I came of age when WS programs were starting and the women’s movement was hitting another peak. What drew me? Everything: the questions, the people, the politics, the passion, the purpose, the activism, the festivals. Women’s Studies, like feminism itself, made (and continues to make) sense of my life.

What is a common misconception you encounter when you are discussing feminism?

I think, unfortunately, that people know more about what anti-feminists say feminism is than what feminists say. Among the most persistent misconceptions: reproductive justice only means a right to abortion; most religions are incompatible with feminism; feminism means whatever any individual chooses to say it means (and feminism means you can’t criticize any choice anyone makes); and then there are the oldies but goodies…feminists hate men, are all lesbians, are selfish, are (too) aggressive and demanding, are unreasonable in their demands, etc.

It’s Women’s History Month; who are some women from history you have loved learning about?

Emma Goldman, Anna Julia Cooper, Christine de Pizan, Mary Astell, Mary Wollstonecraft, Sojourner Truth, Ida B. Wells-Barnett, Jane Addams, Elizabeth Cady Stanton, and many more. Just as important, I loved learning about the work women together did to bring about change, in organizations from anti-slavery associations and women’s labor groups to peace leagues and suffrage associations. And all that work is still being carried on around the world!

I recently came across this image and the idea it reflects online: 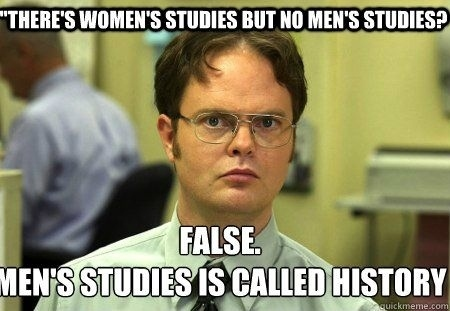 The cartoon is still all-too-true. We know that we still do not know about women’s lives to the extent we know about men’s. It is the accomplishments of men (especially in politics and economics, narrowly defined) that have been deemed historically important, the deeds of men (especially in war, industry, and government) that have determined the ways we distinguish one historical period from another (such as pre-Civil War or post-industrial), and the arenas in which men acted (military, legal, etc.) that important things worth recording were said to happen. This leaves out three things: the impact of all of these deeds and events on various groups of women, the stories of women’s lives both within these boundaries (at work, in political office) and beyond them (in the community, participating in street riots, as victims of gender-based violence, as caregivers, raising crops and children, as activists, etc.), and how we might reconceive historical eras (and philosophical schools of thought, etc.) once we read women into them. I’d say that “general history courses are to men what women’s history courses are to women,” rather than “what women’s studies courses are to women,” because we teach much more than women’s history (including the study of masculinity).

Who are some women in your life that have inspired you?

My two daughters amaze me. My colleagues and students in Women’s and Gender Studies amaze me. The women in my neighborhood who keep on keeping on amaze me.

What is your definition of beauty?

That it evolves (I’m not attracted to the same things or people I was 20 years ago, nor do I aspire to the same ideals I did then) and mostly involves appreciation. I like to think my sense of the beautiful only grows as I come to recognize more forms of caring and resilience and to appreciate a wider range of shapes and sizes and colors and textures. On my best days, I see it everywhere, and the more I see it, the more space it takes up, which is wonderful.