Women were not allowed to learn to read and write Chinese, so to stay in touch they took it upon themselves to formulate their own means of communication. 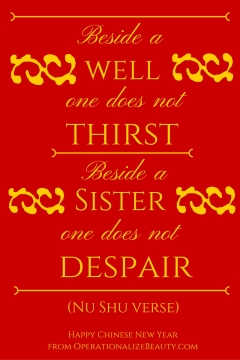 In a time when women’s feet were bound, women were kept in doors, and the goal of marriage was to bear sons, women in the Jiangyong County in Hunan province of China found strength and satisfaction in each other. Growing up, girls were confined to ‘women’s chambers’ in their own homes, and would later be confined to the home of their husband’s family. To ease their isolation, girls were brought together as “sworn sisters” until they were married. A laotong relationship was a step further– girls would be brought together by a matchmaker and would sign a contract. The relationship was expected to last for life. In Lisa See’s novel Snow Flower and the Secret Fan See describes the laotong relationship as “… made by choice for the purpose of emotional companionship and eternal fidelity. A marriage is not made by choice and has only one purpose — to have sons.”

When girls were old enough to be married, they were expected to live wherever their husband’s family lived, and sworn sisters were often separated. Women were not allowed to learn to read and write Chinese, so to stay in touch they took it upon themselves to formulate their own means of communication. Nu Shu, or “women’s writing,” was developed phonetically, as opposed to traditional Chinese languages in which characters represent ideas.

Nu Shu was not only written, but embroidered and used to adorn fans. Nu Shu was also found in “Third Day Books,” journals that a woman’s friends and family would make for her upon her marriage. The clothbound books were delivered to the new bride three days after she was married. Inside, family and friends would fill the first few pages with their laments over losing a friend and daughter, and their hopes for her happiness. The rest of the pages were left blank, for the new bride to fill with her thoughts and feelings. Everything was written in Nu Shu, and though the men couldn’t read it, they seemed to think it was harmless and therefore didn’t mind it.

Lisa See’s book, and a movie based on it, have renewed interest in this ancient and secret language. Since girls have been able to go to school with boys and learn traditional Chinese, the number of women who can read and write Nu Shu is dwindling. People like Hu Mei Yue are trying to change that. Every Saturday Mei Yue visits Pumei, a Nushu Cultural Village with a museum and school dedicated to Nu Shu. She teaches the language to any village girls who show up.

One girl taking the class said, “I don’t know how people can write like this. Each word is like a flower.”