During National Slavery and Human Trafficking Prevention Month, we stand with the survivors, advocates, and organizations dedicated to building a world where our people and our children are not for sale. Together, let us recommit to a society where our sense of justice tells us that we are our brothers’ and sisters’ keepers, where every person can forge a life equal to their talents and worthy of their dreams.

Our people and our children are not for sale.

According to NotForSaleCampaign.org, human trafficking (or, modern day slavery) is defined as: the acquisition of people using force, deception, or coercion with the intent to exploit.

Modern slavery has two main forms: sex trafficking (which we tend to hear the most about) and labor trafficking/debt bondage (which is the primary form of modern day slavery).

Other forms of trafficking include domestic servitude, forced child labor, and the recruitment and use of child soldiers.

Though victims are often moved to different locations, a crime can be labeled as human trafficking as long as there is coercion and/or force.  Human trafficking crimes do not require any smuggling or movement of the victim.

Trafficking and exploitation is literally everywhere. When I first heard about it, I thought surely it wasn’t an issue here in the US. I was wrong.

As Special Agent Angie Salazar put it, “…there is not one place that we could safely say, ‘don’t worry about it (human trafficking) in this area.'” Her words are backed up by evidence that shows trafficking occurring everywhere from big cities, to rural areas. It happens at major sporting events, and in “boom towns” created by extractive endeavors (mining). It happens in low-income, middle-income, and wealthy neighborhoods. It. Happens. Everywhere.

The key in differentiating sex trafficking from prostitution is the level of choice the individual performing the sex act has. Broadly speaking, it is assumed that men and women who work in the sex industry do so voluntarily (though there may be forces such as poverty, addiction, or desperation at play). It is only when the sex acts are committed against the individuals will that it becomes trafficking.

The exception is when the act involves children. In the US, and in most countries around the world, it is illegal to use children in the commercial sex industry. When it comes to children, there does not need to be any proof that the child was FORCED to perform sex acts in order for the crime to be considered trafficking. Furthermore, there are no cultural or socioeconomic rationalizations that will be considered as ‘exceptions’ to this rule. If I am understanding this correctly, any and all sexual interactions with children are considered sex trafficking.

To the men who buy us, we are like meat. To everybody else in
society, we simply do not exist.
– Kiya, survivor of human trafficking

Every citizen can take action by speaking up and insisting that the clothes they wear, the food they eat, and the products they buy are
made free of forced labor. Business and non-profit leaders can ensure their supply chains do not exploit individuals in bondage.
– President Barack Obama

Labor trafficking happens when traffickers force people to work against their will in a variety of industries with little or no pay. Sometimes, people looking for work will enter into work agreements willingly, but once they are away from their home, the recruiter will take their identification and demand that they pay exorbitant fees for travel to the new job. Traffickers inflate the costs of food and shelter, then tack on enormous interest rates to ensure that the laborers toil for little to no pay.

Though the industries in which victims work vary, they seem to be used often in large mining and excavation type jobs, where they are isolated and easily over-worked. Additionally, labor trafficking in these areas often leads to sex trafficking of women and girls to the same area for use by the workers.

A rise in the demand for cheap products has contributed to a rise in labor bondage. Poverty is a huge factor as well, pushing many people who are desperate for work to believe that they are leaving their homes for a better opportunity elsewhere, only to find themselves forced into hard labor for little or no pay. Lack of education is often cited as a cause of trafficking, and while desperate individuals who are living in poverty and lack knowledge about trafficking are often targeted as victims, it is important to note this is not always the case. Ironically, there have been instances of higher education actually contributing to labor trafficking. For example, higher education among girls in Northern Thailand raised pressures and hopes for them to earn good money and increase their families’ social status, leading to unsafe trafficking to Bangkok, Malaysia, and Japan. Racial discrimination and inequality between sexes are also cited as factors contributing to human trafficking.

Children are not immune from being trafficked. They are subjected to forced labor in extractive sectors, like coal and gold mining. As a chocolate lover, I was dismayed to learn that Cote d’Ivoire (which produces more than a third of the world’s cocoa) is a widely documented mecca for child trafficking and forced labor. 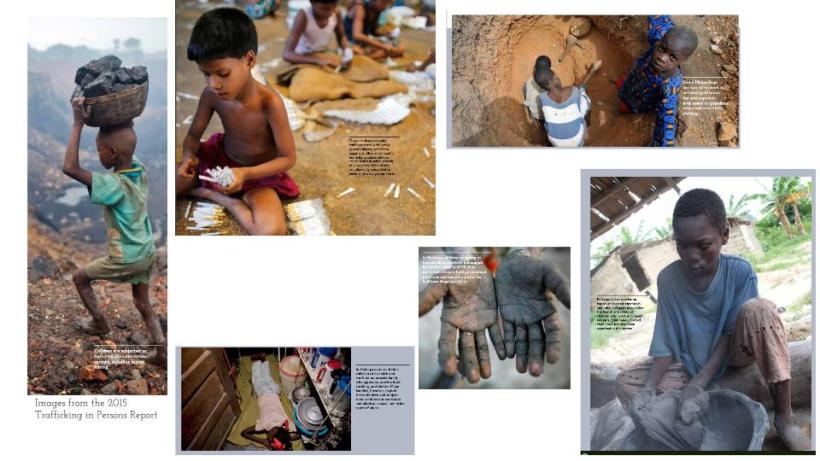 To better fight labor trafficking, it is vital that businesses–and we as consumers– are aware of any potential for trafficked labor in operations and supply chains.  The White House issued this statement:

More than 20 million men, women, and children worldwide are victims of human trafficking.  Companies around the world are taking steps to eliminate the potential for trafficked labor in their operations and supply chains, and President Obama is committed to protecting vulnerable individuals as government contractors and subcontractors perform vital services and manufacture goods procured by the United States.  As the largest single purchaser of goods and services in the world, the U.S. Government has a responsibility to combat human trafficking at home and abroad, and to ensure American tax dollars do not contribute to this affront to human dignity.

There is no doubt, more and more traffickers have been apprehended and brought to justice. In the United States alone, between 2009 and 2012, the pending human trafficking cases increased from 167 to 459. Also since 2009, human trafficking investigations have resulted in 480 arrests, 336 indictments, and 258 convictions.

Worldwide, the numbers are as follows:

Though there has been increased calls to action, and legislation passed to fight trafficking, it is clear this will not be an easy fight. Despite an increase in arrests and convictions in recent years, traffickers still perceive there to be very little risk involved in their work, especially when compared to the profits.  Factors that add to low risk include: lack of government and law enforcement training, low community awareness, ineffective or unused laws, lack of law enforcement investigation, scarce resources for victim recovery services, and social blaming of victims. In both sex and labor trafficking, high demand means high profits. When individuals are willing to buy commercial sex, they create a market and make it profitable for traffickers to sexually exploit children and adults. When consumers are willing to buy goods and services from industries that rely on forced labor, they create a profit incentive for labor traffickers to maximize revenue with minimal production costs.

There is much debate over how to continue the fight against traffickers. While the call to shut down internet sites such as Backpage that enable trafficking seem like an obvious and needed step, some argue that those sites should be allowed to continue, and be used by law enforcement to catch traffickers and reach more victims (‘To Catch a Predator’ style). Proponents of this view state that if we can make their business more risky, maybe we can deter more traffickers.

Sweden has had remarkable success in combating sex trafficking, largely due to the passing and vigorous enforcement of a controversial law that prohibits the purchase of sexual services altogether. Individuals who pay for prostitutes are prosecuted and publically shamed. Though this works for Sweden, some argue that demonizing the entire sex industry (and those who willingly work in it) will just force the entire industry more underground and will make finding victims of trafficking even more difficult.

What seems to be clear is that most voices in the debates are on the side of the victims. That is something we can all come together on. Religious leaders representing Anglican, Buddhist, Catholic, Hindu, Jewish, Orthodox, and Islamic faiths made history in 2014 when they came together for the first time to sign a declaration (see text below) pledging to end modern slavery and calling for action against it as a moral imperative. Each leader gave a statement urging people to support the effort to end slavery. Hindu leader Mata Amritanandamayi said, “if we fail to do something, it will be a travesty against future generations.”

What you can do

When it comes to our beloved chocolate, The Chocolate Campaign is hard at work pressuring chocolate companies to assure consumers that their products are “traffik free” — meaning that no forced (or child) labor went into the harvesting or processing of the cocoa. For right now, the best way to indulge guilt-free is  by checking your chocolate for one of these labels:

Take the quiz at this site to see how your purchases might be contributing to trafficking, and see which companies are dedicated to ending trafficking in their supply and manufacture chains: http://slaveryfootprint.org

Get involved with any of the organizations listed below that are committed to fighting human trafficking.