I was never athletic growing up. I did beauty pagents and McDonald’s commercials. Not soccer and softball.

You know that beautiful quote, “She believed she could. So she did”? I have loved that quote for many a moon.

But today I did not believe I could. But I did. 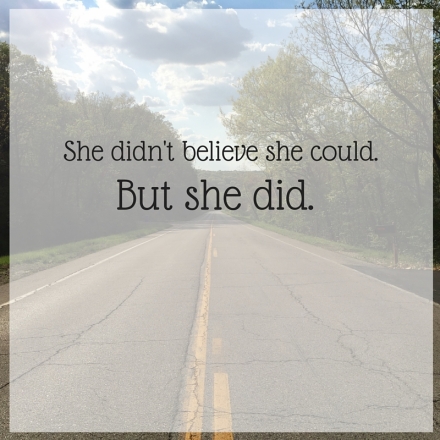 We are lucky to live near several parks and recreation areas. We have bike trails out the wazoo. One such trail leads to one such park– a state park that is riddled with hills. It is where cyclists go to die. Leading into the park, there is a mountain. Ok, we are in central Missouri, so it is really more of a hill. Anyhoo, I decided today would be a good day for a nice 20 mile ride. It has been a while since I have gone that kind of distance, and I would really like to participate in a “metric century” (67 mile bike ride) in the summer. So I though today was the day to do some training. I hoped on the trail and planned to head in the direction of the big scary state park. I knew I was not quite ready for the hills therein, but I thought I could handle the road TO the park. As I happily coasted down the never-ending hill that led to the park entrance, it dawned on me. I would have to turn around at some point. I would have to go UP this beast. Not going to lie. At that point, I cussed a little.

Flash back to TWO summers ago. In another state park near us. My husband is patiently teaching me HOW TO RIDE A BIKE. Yes, ladies and gentlemen. My 30 year old booty was on a bicycle seat for the first time. I got to the point where I could go straight. But turning was out of the question. And those little pillars at the beginning of trails that indicate cars are not allowed– they were terrifying. I was sure I would crash into each one. And I did hit a few. I would walk my bike DOWN hills lest I get to going too fast and loose control. I would walk my bike UP hills because my legs just could not do that. I was a mess. Not even a hot mess. Just a mess. But I kept peddling. 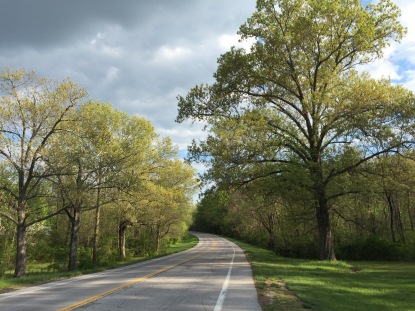 Today that hill seemed to have no end. Going up it, I remember thinking at least three times, “Yeah, I can’t do this. Pull into that driveway.” But then that driveway was behind me. So I thought, “OK, at THAT sign I am going to have to stop.” But then the sign was behind me. Why wasn’t I stopping?! I literally NEVER told myself to keep going. I never said “You can do it self! Slow and steady! You got it!” There was literally NO positive self-talk. And then, I was at a flat bit. And the mother of all hills was behind me. What just happened?!

When I got home I texted my husband: “I climbed the hill outside Babler!” He expressed

his pride. And I realized that these physical feats mean a lot to me. I was never athletic growing up. I did beauty pageants and McDonald’s commercials. Not soccer and softball. The lessons I learned doing those things were many: Eye contact is a lost art, casting does not have time for your silly questions (for real though, don’t ask Danny Goldman what your motivation is), it feels damn good to command a stage (even if you don’t know you are doing it at the time), practice practice practice, be articulate (those interviews, man!), go to every audition no matter how “small” the part is, win gracefully, loose gracefully, and always ALWAYS thank the judges.

What I didn’t learn then is what I get to learn now– the awesome things my body CAN DO! Did you know I can run?! I got that handy “Couch to 5k” app last summer– and I ran 3 miles straight MULTIPLE TIMES! I even got the “Couch to 10K” app in my exuberance. I got up to about 5 miles STRAIGHT. But that shiz takes a long time. Now I’m back to nice little 2 milers. And I can RIDE A BIKE! Those things are crazy– just two little wheels holding you up! Like high heels, but scarier! Because stilettos can’t go 20 miles an hour. Human bums were not meant to sit on those little seats for long periods of time. But we do! Because we can!

I have spent a while saying things like, “I’m not a runner, but…” or “I’m not a cyclist, but…” I think that is toro poo-poo. Do you run? Yes? You’re a runner. Do you pedal a bike for any distance at all? You are a cyclist. I bought my bike from a second-hand bike/coffee shop. I do not have those cool, but so easy to make fun of, padded shorts. Sometimes I forget which finger to use to change my gears correctly. But I am a cyclist. Just ask that hill outside of Babler.